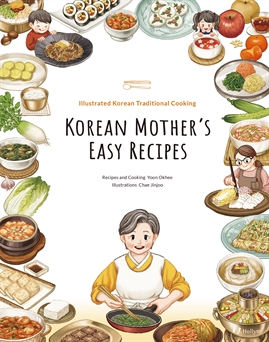 Learn how to make traditional Korean dishes at home with easy-to-follow illustrations.
The author, who has taught Korean cooking to students from all over the world for 20 years, has selected 40 Korean recipes that are fun and easy to make. Main dish, side dish and dessert recipes are illustrated with step-by-step instructions so even beginners can easily follow them. The book also includes special dishes for hosting parties. After practicing Korean cooking and different cuisine from all over the world and teaching Korean cooking at the Blue House Korean Food Experience Center, Cheong Wa Dae Sarangchae, the author has written a book that anyone can follow and enjoy traditional Korean food in the easiest way.

Recipes and Cooking
Mother Yoon Okhee
Researcher of Korean Cuisine, Master Craftsman Cook and Doctor of Science
Yoon Ok-hee majored in food and nutrition and went on to lecture at the university level. She lived in Japan for 4 years where she became interested in food from different parts of the world. Returning to Korea, she learned Korean traditional cuisine from Professor Kang In-hee, a master of Joseon period cuisine, and grew her knowledge and passion for Korean cuisine after studying, a Korean traditional
medical book, 〈Donguibogam〉. In addition to more than 20 years of operating her own cooking academy and lecturing at universities, Yoon has expanded her expertise through the Korean family restaurant Sannae Deulnae, the Korea Food and Culture Institute, and the Cheong Wa Dae Sarangchae Korean Food Experience Center. She now hopes to share the true taste and value of Korean cuisine to her daughter and all those who are interested in Korean cuisine.

After studying Visual Design, she began working as an illustrator and doll artist. Ever since she was young, Chae has always been interested in drawing, crafts, and the colorful dishes her mother made for her. But her passion was more focused on eating the food rather than the cooking itself. Her interest in cooking grew as she became a mother who tries to regularly make healthy and delicious meals for her children. She is now ready to learn the taste and value of Korean cuisine from her mother.