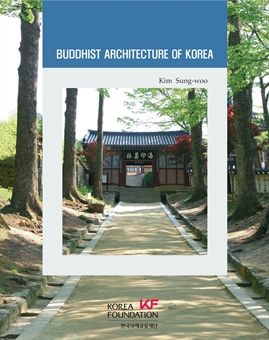 2. From Cities to Mountains: Location and Design of Temple Sites
1) Selecting an Auspicious Site
2) Temple Layout
3) Along the Path

3. Approaching the Buddha: Inside a Temple
1) Primary Buddha Halls
2) Secondary Halls
3) Other Buildings, Belfries and Shrines
4) Pagodas and Budo

4. Temple Life: Pursuit of the Way
1) Within the Buddha Halls
2) Daily Routine of Monks
3) Rites and Ceremonies

Prof. Kim Sung-woo was born in Seoul in 1950. After graduating from the department of architecture at Yonsei University he went to the United States where he received his master’s degree in urban design from the University of Pennsylvania. He went on to receive his Ph.D. in architecture and art history at the University of Michigan, writing his dissertation on Korean Buddhist architecture. Since returning to Korea he has served as a professor at Yonsei University, mainly lecturing on architectural history and theory.
Prof. Kim has published many papers on the subject of architectural history and theory as well as the research report Seongju Hangae Maeul (Hangae Village, Seongju), and the books Songgwangsa (Songgwangsa Temple), Hanguk Geonchuksa (History of Korean Architecture, co-author) and Wonya, the Korean translation of a Chinese book on landscape architecture. Prof. Kim’s research is focused on theorizing the spirit of the traditional architecture of Korea and other Asian countries from the perspective of cultural philosophy and thereby contributing to the future development of architecture.