Marrying Korean: And Other Attempts To Impress, Communicate, And Fight My Way Into An Exot 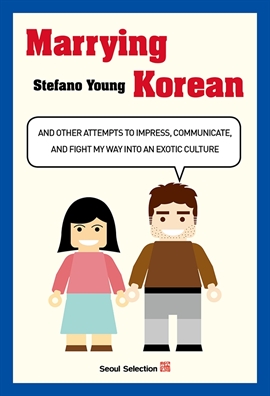 Marrying Korean follows Stefano, an MIT graduate, as he meets the Korean woman who would become his wife and wonders to himself if he could even locate her country on a map. From his first tastes of soju, his first Korean drama addiction, and his first time getting naked with his girlfriend’s father to taekwondo sparring, interviewing at Samsung, and visiting an abalone-farming family on the remote island of Nowha-do, the author chronicles a decade worth of attempts to impress his new Korean family, communicate in the Korean language, and wrestle with the more difficult parts of Korean culture.

[Marrying Korean: And Other Attempts To Impress, Communicate, And Fight My Way Into An Exotic Culture]

- MEETING HER PARENTS, MEETING HER COUNTRY
- SOJU, BEER PONG, AND THE ROMANCE OF CULTURAL EXCHANGE
- KOREAN 101 (OR, HOW TO WIN OVER YOUR GIRLFRIEND IN A SEMESTER OR LESS)
- THE KOREAN HEALTH CLUB: A TRIAL BY FIRE, ICE, AND NAKEDNESS
- CONSUMERISM IS CULTURE: A TRIP TO THE LOTTE DEPARTMENT STORE
- IN KOREA, ALL YOU NEED IS LOVE (OR AT LEAST A LOVE MOTEL)
- A NEAR MISS
- KOREAN CHURCHES: LOOKING FOR THE “FACE” OF GOD
- GRANDMOTHERS
- THE MYSTERY OF PANSORI
- THE BARBERSHOP
- A TRIP TO MR. PIZZA—AND ONE TO THE DOCTOR
- TAEKWONDO (OR, THE ALMOST-OLYMPIAN DEFEAT)
- A NIGHT AT THE JJIMJILBANG (OR AN ATTEMPT AT ONE)
- SAMSUNG: THE INTERVIEW
- LOVE AND MARRIAGE, KOREAN-STYLE
- THE END OF THE LAND
- THE BATTLEGROUND OF LAUNDRY
- AN ISLAND HONEYMOON
- WHERE CHILDREN CHOOSE THEIR DESTINY: THE DOL JANCHI
- JUST STEPS FROM NORTH KOREA: THE DEMILITARIZED ZONE
더보기

Stefano Young didn’t know the difference between Korea, China, and Japan until he was 23 —
but then he met a Korean woman, learned to say “saranghaeyo,” and embarked on a journey of more than a decade to study Korean language and culture. He has appeared on Korean news channels KBS and YTN while studying the language in Los Angeles and contributed a six-part series to the Los Angeles Review of Books Korea Blog recounting his ever-deepening experiences with his Korean family and Korean culture. He has also published Busan dialect lessons for Korean learners. Before writing about Korea, Stefano received his PhD in Optical Sciences and worked in radiology research, publishing in top peer-reviewed academic journals such as Medical Physics and IEEE Transactions on Medical Imaging. He now lives in the San Francisco Bay Area with his wife and their three-year-old daughter.