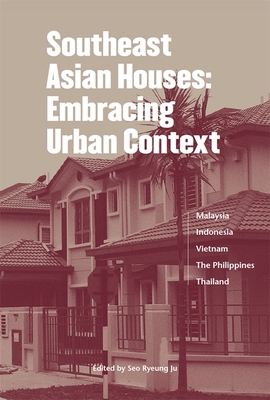 The modernization of traditional houses in each country may be understood as a process by which various aspects of culture and architecture originating from China, India, European colonial countries and international style were assimilated into various forms and elements of traditional houses. In contemporary houses recently developed in Southeast Asian cities, influences of more nearby regions such as South Korea, Hong Kong and Singapore can easily be found.

Even under such multi-cultural influences, Southeast Asian countries sought compromises and maintained each country’s unique housing culture, resulting in the differentiation of each country’s housing style.

This book aims to find out the uniqueness of each Southeast Asian country’s modern housing through the understanding of the modern housing typologies of each county produced by the process of modernization. Previous studies of Southeast Asia’s urban housing were mostly on political, institutional and economic issues, which can be said to be macro-issues. However, this book focuses on the forms of urban housing, which is rather a micro-issue, compared to previous studies.

Seo Ryeung Ju is a professor in the Department of Housing and Interior Design at Kyung Hee University. She has focused on researching the traditional culture of housing and housing design of new towns in Southeast Asia since 2009, supported by the National Research Foundation (NRF), and she has published a number of articles about Malaysian and Indonesia houses. She has also expanded her research scope into other Southeast Asian countries.

She established the Asian Research Center for Housing (ARCH) as an anchor of the Asian Housing Education & Research Network, which serves as a professional network for researchers and professionals in the area of housing studies in Asian regions. As her first action with ARCH, she organized the first Southeast Asian Housing Forum, titled “Commonality and Diversity in Southeast Asian Housing: A Search for New Identity,” which was held in Seoul, Korea, on October 6-7, 2011, with twelve housing professionals from Malaysia, Indonesia, Thailand, Vietnam and Cambodia. This laid groundwork for sharing the housing cultures of each Southeast Asian country and building a strong academic network. She recently served as chair of the scientific committee of the Asia-Pacific Network for Housing Research (APNHR) and successfully organized the network’s 2015 conference, held in Gwangju, Korea.

She has also published ARCH field research reports periodically: in 2011, Modernization of Vernacular Houses in Kampong Bharu, Kualar Lumpur, Malaysia, and in 2012, Houses in Southeast Asia; A Glimpse of Tradition and Modernity.

Saari Omar is an alumnus of the Architectural Association Graduate School of Architecture (AA) London, from where he graduated with an MPhil degree in 1990. Omar taught urban mass housing design studio courses at the University of Malaya, Kuala Lumpur, and was a coordinator for a joint-studio urban housing program with the University of Southern California and Kyung Hee University of Korea from 2005 to 2014. Currently, Omar is a practicing architect involved with urban mass housing in Kuala Lumpur and has served as member of the Board of Architects Malaysia since 2009. He is also an associate professor at City University of Malaysia.

Ismet Belgawan Harun is a senior lecturer in housing and human settlement in the Bandung Institute of Technology’s Department of Architecture in the School of Architecture Planning and Policy Development. He has a master’s degree in human settlement planning and development from the Asian Institute of Technology, Thailand, and has a doctoral degree in urban planning from the Department of Urban Engineering at the University of Tokyo. His research includes housing typologies and land-related issues of housing development. He served as head of the Center for Environmental Studies of Bandung Institute of Technology from 2001 to 2003 and has active involvement as resource advisor to the Ministry of Public Works and Housing of Indonesia.

Pham Thuy Loan is an associate professor and Deputy Director at the Vietnam National Institute of Architecture (VIAr) under Vietnam’s Ministry of Construction. She obtained a doctorate degree from the University of Tokyo in 2002 with a dissertation written about housing provision in Vietnam. From 2009 to 2014 she was the head of the Department of Urban Planning at the National University of Civil Engineering (NUCE) before moving to her current position. She is now in charge of supervising the PhD program at VIAr and advising various local governments on urban planning and design, as well as consulting for many housing development projects in Vietnam. She has a wide international network with professionals in the field of architecture and housing study. Being author and editor of many academic papers, book and chapters and presenting as a conference keynote speaker, she is also an activist in sharing knowledge and promoting sustainable development in Vietnam.

Mark Anthony Mateo Morales is an assistant professor at the University of the Philippines–School of Urban and Regional Planning (UP-SURP). He has a bachelor’s degree in architecture from the University of Santo Tomas (UST) in Manila and a master’s degree in urban and regional planning from the University of the Philippines Diliman campus. He taught part-time at the UST College of Architecture before accepting a full-time faculty position at UP-SURP, acquiring tenure in 2010. Mark spent three years in Japan completing his Doctor of Engineering degree (in urban and regional planning) at the University of Tokyo. Dr. Morales’ research is interested in the socio-spatial impacts of cultural development in cities, with emphasis for the poor and marginalized, as well as on transit-oriented developments (TODs). Morales is currently the director for Training and Extension Services of UP-SURP.

Eggarin Anukulyudhathon is an associate professor in the Department of Architecture at Kasetsart University. He holds a PhD in urban planning and environment from Ecole d’Architecture Paris-Villemin in France and has been working in rural and environmental protection and development for 30 years. His work is concentrated especially in rural poor areas where people live off of natural resources like water and forests. A recent experience in natural resources was the revitalization of the waterfront village near Nonghang Basin, a freshwater basin in the northeast region of Thailand where residents are trying to resist urban agglomeration impacts to the pure natural resource. The project promoted sufficiency development methods to preserve nature, established a paddy field for food cultivation and revitalized the dwellings of the people in the Baan Pang village, emphasizing and promoting a better quality of life for the people.