Across the Tumen: A North Korean Kkotjebi Boy's Quest 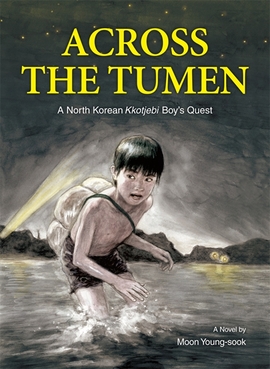 
YEONG-DAE IS A YOUNG BOY WHO HAS TO BEG ON THE STREETS AS A KKOTJEBI JUST TO SURVIVE.
HE CROSSES THE TUMEN RIVER TO FIND HIS SISTER, HIS ONLY SURVIVING FAMILY.

As North Korea undergoes a devastating famine, Yeong-dae loses both his parents and is forced to beg on the streets. Soon, this young boy sets off on a desperate journey to China to find his sister---his last living family member. Captured by the authorities, he is sent back to the North, where he is thrown in jail and tortured. Once he is finally released, he crosses the Tumen River again, more determined than ever to find a place where he can live a decent life. This inspiring tale offers a glimpse into the horrors faced by North Korean children---and their indomitable will to survive.

“When I started reading this book, I found myself amazed that the author seemed to understand North Korean society even better than me---and I used to live there! I was sucked into the story, and it felt less like reading a novel and more like reliving my childhood and escape from North Korea. Around 25,000 North Koreans have defected to the South as of 2013, and it seemed like the heartbreaking tale of each defector was distilled into this story.” - Kim Young-il, president of PSCORE

[Across the Tumen: A North Korean Kkotjebi Boy's Quest]

The Border
Kids’ Work
Big Sister
Strange Songgi Balls
Mother
Grandmother’s House
Sunam Market
Kkotjebi
I’m Sorry, Yeong-ok
On to Musan
The Night Crossing
The Elderly Acupuncturist
The Trip to Wangqing
The Detention Center Outside of North Korea
The Detention Center Inside of North Korea
Back at the Old House
The People in the Cave
Barbecued Ribs in Shenyang
A Tour of Xita
Reunion
Yeong-ran’s Secret
Meiyang’s Little Hand

Moon Young-sook was born in Seosan, South Chungcheong Province, in 1953. Her literary career took off when she won the 2nd Blue Literature Prize in 2004 and the 6th Literature Neighborhood Prize for Children’s Literature in 2005. In 2012, she received a creative grant from the Seoul Foundation for Arts and Culture. Moon’s main reason for writing stories is to teach young people about parts of Korean history that Koreans must never forget. Some of her best-known works are the young adult historical novels “The Kareiski’s Endless Wandering” and “The Children of Henequen.” She has also written a number of children’s novels, including “Picture in the Tomb,” “The Dark Sea,” “Hagi: Lady of the Court,” “The Coat of Many Colors,” “The Old Man Who Became a Little Child,” and “The Bread of Kaesong.”

After graduating with a bachelor’s degree in English literature, David Carruth moved to Seoul, South Korea, and studied Korean. For the past several years, he has been translating texts in a variety of fields including literature, journalism, economics, and science. Recently, he translated short stories and drama for the Korean Writers series, which is organized by the Arts Council Korea.